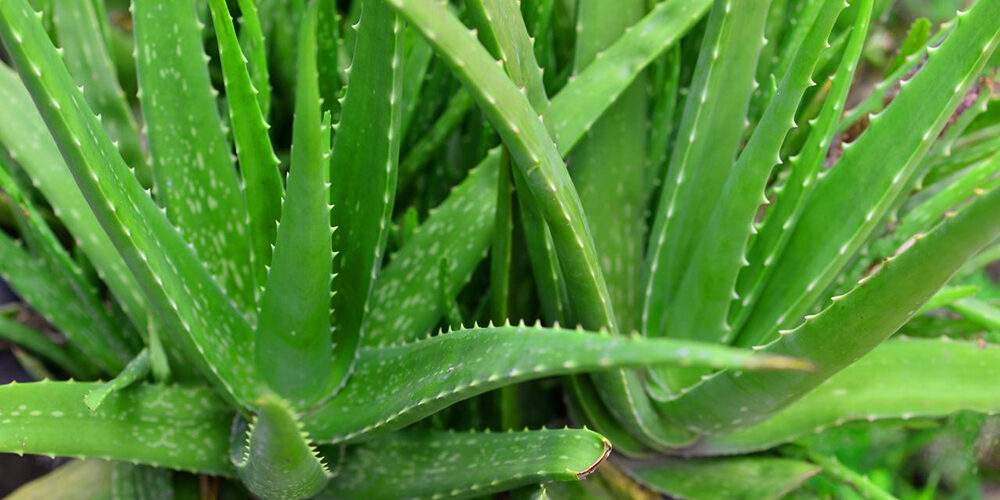 The aloe vera plant is an easy, attractive succulent that makes for a great indoor companion. Aloe vera plants are useful, too, as the juice from their leaves can be used to relieve pain from scrapes and burns when applied topically. Here’s how to grow and care for aloe vera plants in your home!

Aloe vera is a succulent plant species of the genus Aloe. The plant is stemless or very short-stemmed with thick, greenish, fleshy leaves that fan out from the plant’s central stem. The margin of the leaf is serrated with small teeth.

Before you buy an aloe, note that you’ll need a location that offers bright, indirect sunlight (or, artificial sunlight). However, the plant doesn’t appreciate sustained direct sunlight, as this tends to dry out the plant too much and turn its leaves yellow.

Keep the aloe vera plant in a pot near a kitchen window for periodic use but avoid having the sun’s rays hit it directly.

Please note: The gel from aloe vera leaves can be used topically, but should not be ingested by people or pets. It can cause unpleasant symptoms such as nausea or indigestion and may even be toxic in larger quantities.

How to plant (or repot) an aloe vera plant

If your aloe plant has grown leggy, has gotten too large, or simply needs an upgrade, it’s time to repot it. Here’s how:

How to take care for an aloe vera plant

Mature aloe vera plants often produce offsets—also known as plantlets, pups, or “babies”—that can be removed to produce an entirely new plant (a clone of the mother plant, technically).

How to get an aloe to flower

Mature aloe vera plants occasionally produce a tall flower spike—called an inflorescence—from which dozens of tubular yellow or red blossoms appear. This certainly adds another level of interest to the already lovely aloe!

Unfortunately, a bloom is rarely achievable with aloes that are kept as houseplants, since the plant requires nearly ideal conditions to produce flowers: lots of light, sufficient water, and the right temperature range. Due to these requirements (mainly lighting), aloe flowers are usually only seen on plants grown outdoors year-round in warm climates.

To give your aloe the best shot at flowering:

Aloe vera plants are most susceptible to the usual indoor plant pests, such as mealybugs and scale.

Avoid overwatering to keep these conditions from developing or worsening.

To make use of the aloe vera plant’s soothing properties, remove a mature leaf from the plant and cut it lengthwise. Squeeze the gel out of the leaf and apply it to your burn, or simply lay the opened leaf gel-side–down on top of the affected area.

Do not ingest the gel, as it can cause nausea and other unpleasant symptoms.