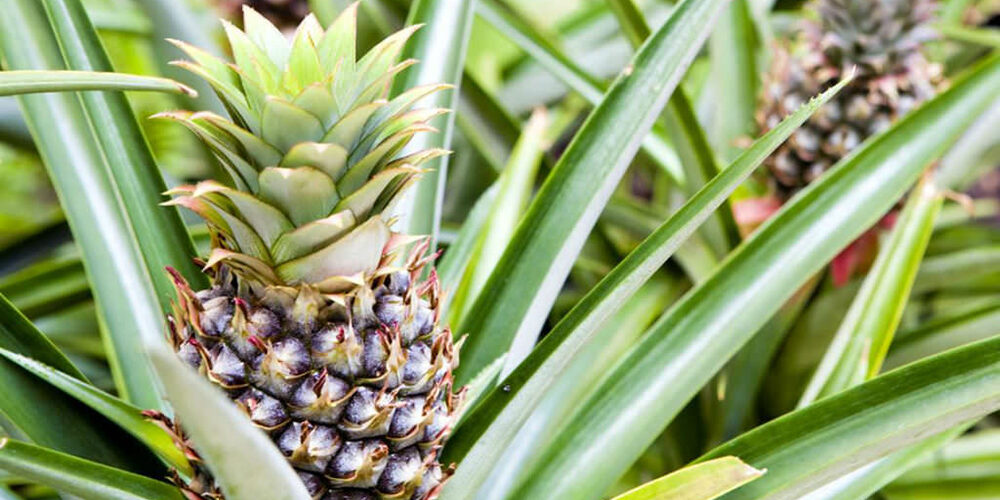 Rooting takes a couple of months, and it’ll likely take two to three years to get fruit, but in the meantime, you can enjoy the spiky tropical foliage and the fun of growing a tropical treat.

Pineapples are a type of bromeliad, which makes them a cousin to Spanish moss and the colorful bromeliads commonly grown as houseplants.

Like other types of bromeliads, pineapples are able to absorb some water and nutrients through their leaves in addition to their roots.

A mature potted pineapple plant will be several feet across and tall, and a mature plant will need a five-gallon planting container. It will take at least a year of growing to get a plant to this size. You can put the pot outdoors during the summer, but you need to bring the pineapple plant inside before the first frost of fall.

How to Root a Pineapple Crown

Follow these easy steps to get your pineapple plant started:

The next time you buy a fresh pineapple to eat, make sure to choose one that’s evenly ripe, with a nice healthy set of green leaves at the top. Avoid ones that are overripe or that have dead or sick-looking leaves.

Using a sharp knife, slice off the top of the pineapple fairly close to the crown. Carefully cut away the rind and remaining fruit – it’s important to remove any fruit flesh that will rot later. Then, make very thin slices in the stalk, until you see a ring of brownish dots. These are the “root primordia,” the unformed roots that you’re about to grow.

Pull off some of the lower leaves on the pineapple stalk, exposing about an inch of bare stalk.

Set the pineapple crown aside for a few days to allow the wound to dry. Pineapples are very susceptible to rot, so it’s important to dry out the cut end before planting.

Fill a 6” to 8” flower pot (clay is best, but any pot will do) with a light, fast-draining mixture – such as cactus potting mix – or a mixture of peat, sand, and perlite.

If you like, you can dip the end in rooting hormone before planting. Plant the pineapple crown about an inch deep, gently firming the soil around it.

Don’t use any fertilizer yet. To keep from overwatering, some people put the pot in a terrarium, or in a lightly sealed plastic bag, to allow the plant to recycle its own water.

Step 7: Wait for Pineapple to Root

It’ll take about 1-3 months for your pineapple to root. To test the progress, very gently tug on the crown to see if it is taking hold in the soil. Don’t pull hard enough to break the roots.

Once your pineapple has firmly rooted, it will begin growing new leaves from the center.
At this point, you can repot the plant in a 10” to 12” pot, using a rich but fast draining potting mix.

After about a year of growing, you can move it to its final home in a large 5 gallon planter.

How to Care for Your Pineapple Plant

Your pineapple needs bright light or full sun for most of the day. It can handle a little bit of shade as long as there’s plenty of light.

Keep the plant away from freezing temperatures. The large pineapple plant in the photos spends the winter in an unheated North Carolina basement, in a warm sunny nook created by a large south-facing window.

Overwatering and overfeeding are the two best ways to kill a pineapple plant. Water only as needed, and feed the plant about once a month with a balanced organic fertilizer at no more than regular strength.

Your pineapple plant will do most of its growing during the warm seasons and will slow down when the days get short.

Like other bromeliads, it can be very difficult to get a pineapple to bloom, and it’s not likely to bloom or produce fruit for 2-3 years. If it doesn’t bloom on its own, one popular way to induce blooming is to expose the pineapple plant to ethylene gas by enclosing your pineapple plant in plastic with a few overripe apples for a few weeks during the winter.

As the apples decompose, they release ethylene which stimulates flowering.

Once your pineapple plant flowers, it takes several months to grow fruit. Smaller plants will produce smaller pineapples, but they’re just as yummy! Pick the pineapples when they are evenly ripe and golden yellow.