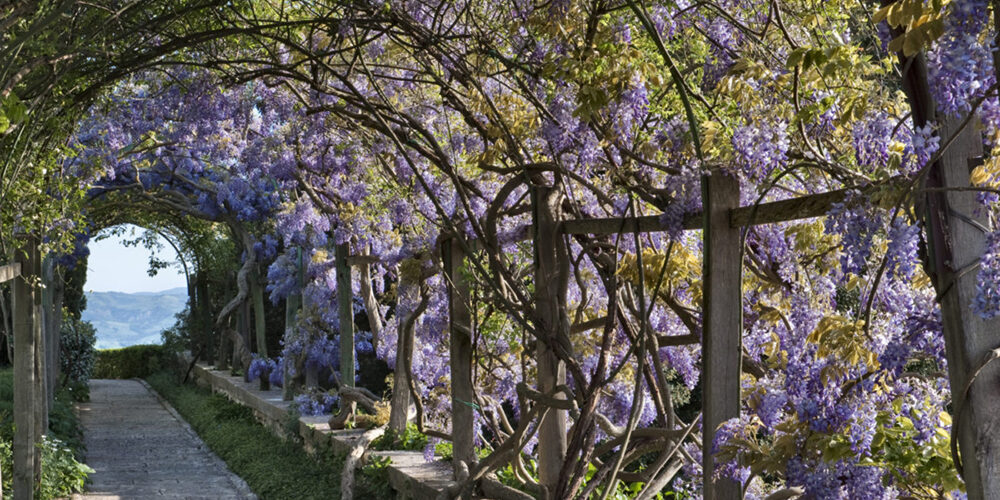 Wisteria is a long-lived vining plant with cascades of blue to purple flowers that look spectacular hanging from a pergola or archway in spring and early summer. However, this vine is a fast and aggressive grower—often reaching 30+ feet long—and is known to grow quite heavy. Wisteria vines will work their way into any crook or cranny they can reach, so it’s advised to not plant them too near to your home.

Wisteria flowers are beautifully fragrant, providing a feast for the senses. After flowering, a brown, bean-like pod stays on the plant until winter. Blooms only appear on new growth.

Note: Plant wisteria with caution! All parts of the wisteria plant contain substances called lectin and wisterin, which are toxic to pets, livestock, and humans. These toxins can cause anything from nausea and diarrhea to death if consumed in large amounts.

Is wisteria an invasive plant?

Wondering how to tell the difference between the Asian and North American species?
Asian wisteria are aggressive growers with fuzzy seed pods, while North American wisteria are not quite as aggressive in their growing habits and have smooth seed pods and fruits, as well as more-or-less cylindrical, bean-shaped seeds. Another difference is that American and Kentucky wisteria’s flowers appear after the plant has leafed out in the late spring, whereas the Chinese wisteria’s blooms appear before its foliage.

When to plant wisteria

Where to plant wisteria

How to plant wisteria

How care for wisteria

Pruning is the secret to good flowering, as wisteria only bloom on new wood.

When your wisteria wont’t bloom

Wisteria are notorious for taking a long time to bloom. Don’t expect flowers for 2 to 3 years after planting. Some readers have sworn by this method to spur on blooming:

If you are located in North America, consider planting a species of wisteria native to the continent, such as: