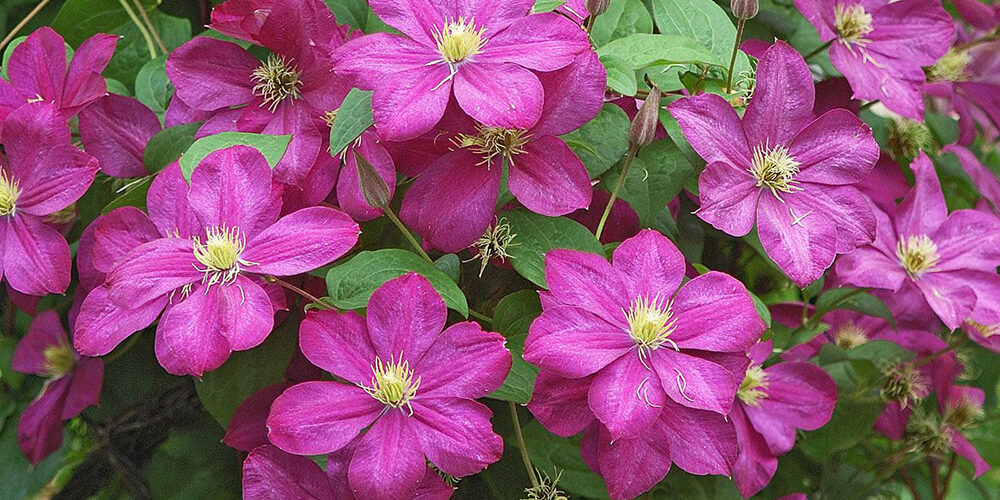 A versatile and hardy flowering vine, clematis is a well-behaved favorite and an excellent choice to adorn an arbor, trail from a trellis, or climb a tree.

With more than 250 species to choose among, clematis vines flower in shades of purple, blue, white, pink, and burgundy in temperate climates (you can find cultivars to thrive in USDA growing zones 3 to 9). A long-lived perennial, clematis will clamber gracefully across the top of a fence to fill in bare spots—without ever behaving invasively.

Plant these sun-loving vines in spring or fall in well-drained soil. The foliage will die back in winter and may be slow to emerge in spring—mark the spot where it’s planted so you can avoid disturbing the roots before the vine leafs out.

People who love flowers pretty much agree on their adoration of the exuberant blooms of the clematis vine. What they (and seemingly everyone else in the world) definitely do not agree on is how to pronounce the name of this plant. I can attest that here in Brooklyn there is great confusion over whether to say “CLEM-uh-tis” or “cla-MA-tis.” And, to further complicate matters, some Brits apparently say “clem-MAY-tis.”

One is tempted to burst into a few bars of Ira Gershwin’s masterpiece “Let’s Call the Whole Thing Off,” but then we would have to digress into a debate about “to-MAY-toes” versus “to-MAH-toes” and frankly, it’s clear to me that Gershwin was not a gardener. Otherwise, he would have been compelled to include a verse about the clematis confusion.

Clematis is a genus of more than 250 species, mostly vines but including some woody herbaceous perennials, and is related to the Ranunculaceae or buttercup family. Unlike other members of this large group, which includes columbines, anemones, and hellebores, clematis flowers have no true petals. Instead, they have sepals, which in this case are often large and brilliantly colored petal look-alikes.

In most other flowers, sepals are utilitarian green modified leaves that form an organ called the calyx, which forms a protective wrapping around a flower bud. When the flower blooms, the calyx supports the petals. The lack of petals, a condition scientifically known as being “apetalous,” appears to be due to some sort of genetic modification whose purpose is not yet fully understood. While the scientists try to solve this mystery, we can simply enjoy the fact that the sepals of the clematis more than adequately replace petals and are, in fact, among the showiest and most gorgeous flower parts imaginable.

One of the hardest parts of growing clematis is selecting which variety to plant. The choices are virtually limitless. Flowers can be huge or tiny, flat and open with four to 10 sepals or shaped like stars or bells or tubes. The color range is staggering. Flowers are sometimes striped or speckled or ruffled or have double rows of overlapping sepals. Additionally many varieties have ornamental seed pods that linger to embellish the garden long after the flowers have gone. Aesthetics aside, it is important to select a variety that is well suited to your climate and location and to give it the most appropriate site in your garden. Once established in a spot, clematis does not like to be moved and can take as long as a year to recover from being transplanted.