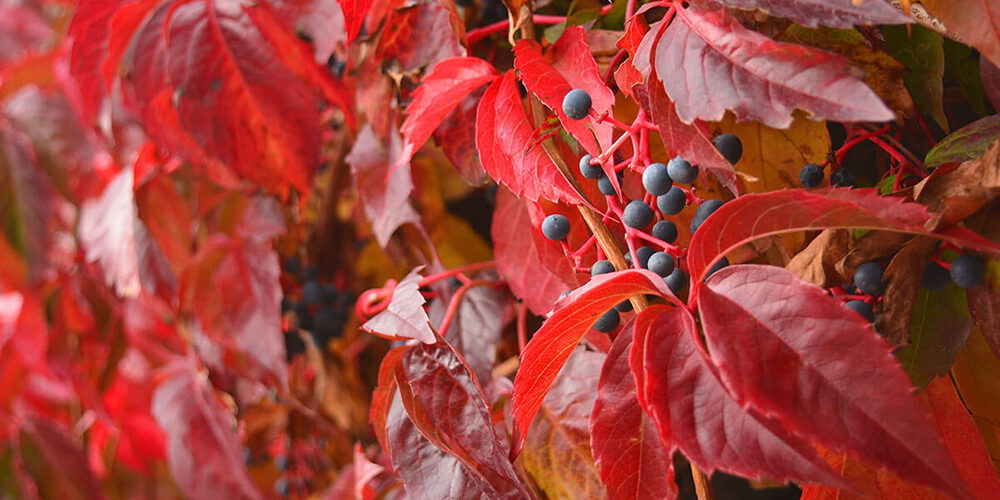 Virginia creeper is a climbing vine with a lot to recommend it if used properly in a landscape, as it will grow quickly to cover an unattractive wall and attaches itself with adhesive pads and aerial tendrils (instead of roots) and won’t damage a facade.

In autumn the five-lobed leaves of Virginia creeper (Parthenocissus quinquefolia) turn a brilliant scarlet that’s similar to the rosy color of its cousin, Boston ivy.

Now for the bad news. A vigorous grower that quickly can reach a height of 50 feet, it can choke out less aggressive plants and even can overwhelm a tree canopy if the vine is not kept in check. However, with a little care, it can be kept within a restricted area. Where its climbing ambitions have been frustrated—on the second floor—it hangs down in vines like a curtain.

When it comes to vines and climbers, would you rather have a pet leopard or a house cat? This is the difference between Virginia creeper and Boston ivy, two plants frequently confused because of the similar shapes of their leaves and the tendency of both to turn a brilliant scarlet in autumn. But remember: Virginia creeper is less commonly cultivated in domestic situations for a good reason. It has a wild nature.

Native to Virginia but not a creeper (unless you consider its way of traveling underground, with spreading rhizomes).

Native to the eastern United States, Virginia creeper is not always welcome elsewhere, because it tries to escape into the wilderness.

Like its other close relation Boston ivy, Virginia creeper is hardy all over most of the the United States (in USDA growing zones 3-9). It is even more vigorous than its relations, reaching heights of from 40 to 50 feet and setting up camp at the tops of trees. However, with a little care, it can be kept within a restricted area, like the specimen next door to me (pictured above). Where its climbing ambitions have been frustrated—on the second floor—it hangs down in vines like a curtain.

Virginia creeper is heaven for birds and insects, providing food and roosting opportunities where it is allowed to flow freely. Native plants host a wider variety of native wildlife, and climbers are particularly noted as shelter for invertebrates. For a wild garden, or a relaxed front path, growing Virginia creeper is an act of generosity.